This week, the Keystone pipeline leaked an estimated 210,000 gallons of oil in South Dakota. TransCanada has since shut down the pipeline for immediate clean-up. While officials say this spill has not affected any sources of water, it doesn’t give the people of Nebraska much confidence in approving its expansion. The Nebraska Public Service Commission is set to make a decision soon on whether or not to approve a route through Nebraska for the even bigger, riskier Keystone XL tar sands pipeline. The Keystone XL would carry 830,000 barrels a day of tar sands oil with potential for even bigger oil spills.

"It was just a matter of time. There have been over 200 significant leaks in these pipelines since the year 2000. This is the exact threat that the Lakota people were trying to protect their sole source of water from at Standing Rock." ~ Daniel Sheehan, chief counsel of the Lakota People's Law Project via CBS

The Keystone Pipeline is part of a 2,687-mile system that will also include the proposed Keystone XL pipeline, which has been opposed by many environmental groups, American Indian tribes, and also the Obama administration. 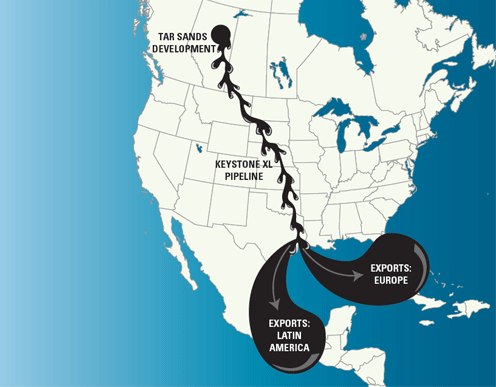 The Keystone XL Pipeline would cross hundreds of rivers and streams, threatening sources of drinking water for millions of people. It’s not a matter of if the pipeline will leak again, but when.